Since 1996, the World Unity Flag has been passed from person to person,  It is  co-creative symbol and concept representing our inherent unity – the interconnectedness and interdependence of All Life. 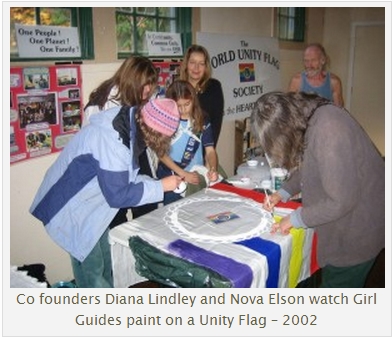 Introduced and offered to the world community  in the Spring of 1996 at an international environmental law conference “From Evolution to Enforcement,” which took place at the University of Victoria in British Columbia Canada.

Many diverse people , from every walk of Life and in every continent have helped to co-create this consecrated symbol, which exists to illustrate the concept of unity.  The interconnectedness and inter-dependence of All Life.  Beyond  bias, borders…bridging segregation and separation…

The World Unity Flag is neither political nor religious, it is inclusive and devoid of any specific affiliation… Offered to the World Community as a  recognizable “unifying-symbol” to illustrate and promote awareness and appreciation of our world as a whole-system.  The World Unity Flag  flows freely and is shared by All.

Like the air and water,flowing through the natural networks of our world community. 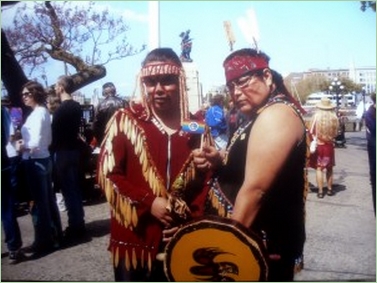 To this aim, The Unity Flag continues to  promote international unity as the means for us to work collaboratively and cooperatively in  facilitating the strong binding agreements and cooperative strategies humanity needs to rapidly reverse greenhouse gas emissions and transition to a carbon neutral economy.

Offered to First Nations First…The World Unity Flag traveled with the “Unity Ride” from P.A.Northern Saskatchewan to Grey Horn Butte, Wyoming, to celebrate “World Peace and Prayer Day”.  The very first co-creative Unity Flag (worked on by 2000 people) was presented to a Mauori woman, who agreed to take it to Australia…

1996  International environmental law conference “From Evolution to Enforcement,” which took place at the University of Victoria in British Columbia Canada. ?

1999 - traveled to Arizona and met organizers for the transcontinental spiritual-run, “Peace and Dignity” Journey

Travelled from BC to Teotihuacan Pyramidas de Sol,(of the Sun and Moon…)  de Luna(, near Mexico City, to attend 4 day ceremony with Runners and representatives from Indigenous nations from North, South and Central America, as well, attended International Indigenous People’s summit.

2001 SSI (sunrise to sunset) walk for Unity, Peace and Dignity

Traveled to Boston Mass area, and visited “The Peace Abbey.”

Wisdom Conference, Summit on Sustainability and Spirituality in Vancouver

2003- Participated in  V-Day rally, put on by Amnesty International which brought International attention to the plight of over 500 missing women in the Mexican city of Juarez.  The march went from US city El Paso over the bridge to Juarez.  Eve Ensler, Sally Field, Rosie Perez, and Jane Fonda participated in this huge rally, “Non Uno Mas!  Not One more!”  A small Unity Flag was placed on the touchingly beautiful Code Pink altar.

Unity Flag toured with the One Love crew across the US to numerous festivals and cultural gatherings…most notably on tour brightening up the speakers on stage…with Michael Franti and Spearhead with visiting performing artist, Ziggy Marley.Unity Flag was made by approximately 800-1000 people, in Honour of his Holiness’s, the Dalai Lama’s visit to Vancouver.  this flag was put forward in its intention publicly at a “Stop the War” gathering on Saltspring island, on March 13th – the 1 yr anniversary of the latest war/ invasion on Iraq. (No war is a “just “war.)The Unity Flag  was first painted upon by over 100 youth representatives from 12 district 62# schools .This flag was also blessed at a conference on Sacred Waters, hosted by Cowichan First Nation representatives at the Simon Charlie foundation and Saanich First Nation elders.

This Flag was also blessed and painted upon by many spiritual leaders and representatives from many diverse Faith groups at a Multi-Faith Summit, organized by the Vancouver Multi-Faith action Committee. An incredibly inspired and profoundly moving event, of such beauty mere words could not express.

SER (Society for Earth Restoration) annual conference, where participants made a Unity flag approx 500 participants and was danced in by traditional First Nation dancers, visiting from the Cowichan Territories and passed to conference representaive from Sargosa, Spain to be taken there to proceeding events.

A World Unity Flag (which was painted some two years prior by over 50 youth at an inclusive Leadership conference in honour of the 4th anniversary of the Earth Charter which traveled to Japan and Australia with, recording-artist Michael Franti and Spear Head,) was presented to Earth Charter co-founder, Chair-person of the Rio and Johannesburg Earth Summits, Maurice Strong.

Traveled to Veracruz, Mexico for international YES Summit on Youth employment. Over 1200 youth leaders from over 100 countries were in attendance.

CANDIL lecture hosted by the World Federalists which took place at UVIC on Canada, Democracy and international law.

Hosted volunteers for Peace from Japan, Korea, Canada and Belgium

Another co-creative flag was made to celebrate and support the important work of the Citizens Initiative for Departments of Peace Campaign. An all-day fundraiser was held in Victoria BC, Canada at the White Eagle Hall in James Bay. (see: www.departmentofpeace.ca )

We met up with multi tasking/ multi-talented representatives from Toronto-based network TakingIT Global, a most amazing and inspiring group of young people dedicated and doing great work in the world – educating and supporting social change.  These folks are Tomorrow’s Future today!  Check them out at www.takingitglobal.org

Return to homepage of www.WorldUnityFlag.org